The morning started early: after 3 hours of deep and fast sleep, the alarm clock went of at 5:00. And what a shock that was! The big difference I immediately felt was that after the milliseconds it took for me to acknowledge where I was and remembering what I was there to do, it took me no time to jump out of bed, grab a quick snack and some coffee from my thermal bottle and there I was – ready to rock and roll!

Note to self: at the end of the day, start the flash cards backups and the battery charging routines earlier. No way I’ll make it with 3 hours of sleep and still driving.

5:45 everybody was out close to the cars and ready to leave. Target was close: about 20 km up to the Covadonga lakes, hoping for a great sunrise, but expecting quite a lot of fog (actually, lower clouds). The trip up takes about 30 minutes most of it still in the dark, in a curvy, steep and slim lane and about half the way up, we were already dee into the clouds. Feeling an unusual attraction to fog, it actually didn’t bother me  that much. I was sure to make something out of the given conditions. On arrival, the minimalist scope I was preparing to simply vanished. Before my eyes, the Ersina lake and facing south, the clouds danced on top of the crystal clear waters. The daylight was still very pale but already the mood was setting. With this low light conditions, I opted for keeping the Mamiya in the car trunk and focus on the D700. 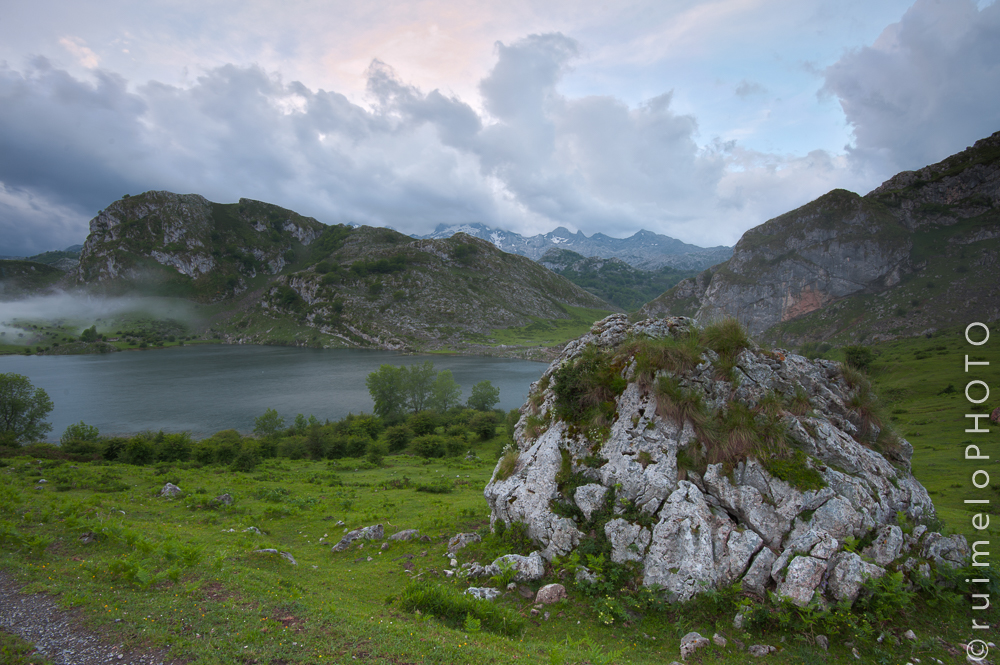 We are going for the possibility of a great session. A couple more shots with alternate viewpoints from this location and I felt there wasn’t much more to do here. I looked around, taking deep breaths into the fresh, moister air of the mountains. A bulky rock 300 m away and about 100 m up caught my attention. It was time to go. The team was already spreading around, taking the most of the fantastic scenario that was being presented to us. Gear ready on my back, steady strong steps and seriously heavy breading for 15 minutes and I reached the desired location. Somehow I managed to avoid all the cow mega droppings on the way up… or did I? It took me another 5 minutes to get my breath back and setup the camera and tripod. 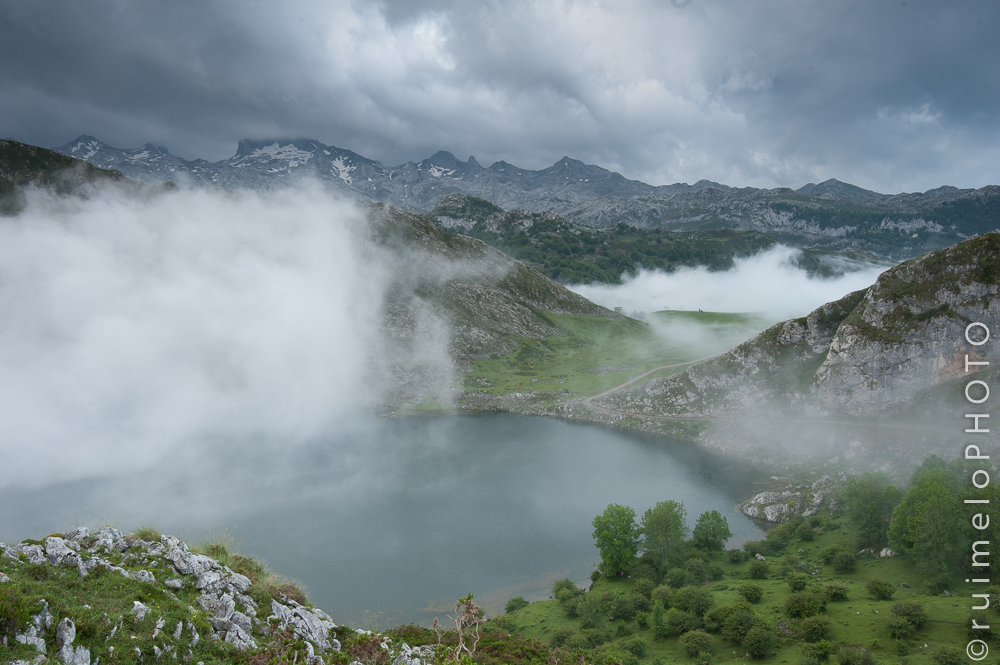 View from the top. Enol lake.

My location was amazing. What a great decision to come all the way up here. I was now facing West, the  lake bellow me and the whole valley unveiling before my eyes from beneath the dancing clouds. In the first plane, a set of smooth rocks with a soft pillow of flowers completed the view. Gotcha! 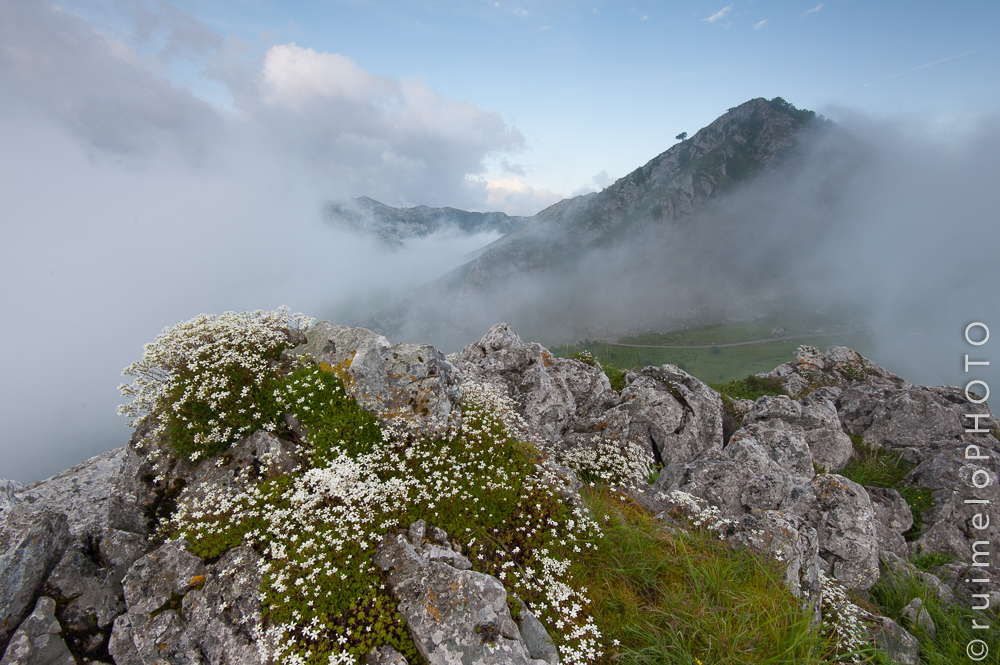 Top of the mountain with low clouds ans small flowers.

The clouds faded in and out revealing a group of peaceful cows curious by the presence of such a figure as myself. I kept shooting, always with an eye on these calm beasts… one never knows, I thought.

Whenever the clouds rushed by and covered the area I was, they completely covered the sight, at which point I covered the machine and lens with a shower cap and took cover behind the closest rock. The air was thick with humidity and in seconds everything was dripping water. Keeping the filters clean was a pain.

But, when the clouds faded away…. wow

I felt like frozen in time and it was not before I start hearing the rest of the gang calling from bellow. Time to move to the next lake: Ercina.

7:30 after a short 5 minute car ride we are at Ercina. Light was far stronger than before and it was time to unplug the digital world and embrace the senses. Time for the Mamiya. It felt almost like bumping into an old friend in the street. picking up the 2,5 Kg of metal and gears, no photometer, reversed image and a mirror that will scare any living thing in a 500m radius with its sound when retracting. Loaded the back with an old Velvia slide film and off I went… into the fog.

Slides are now back from the lab. Didn’t have time to scan them yet, though… 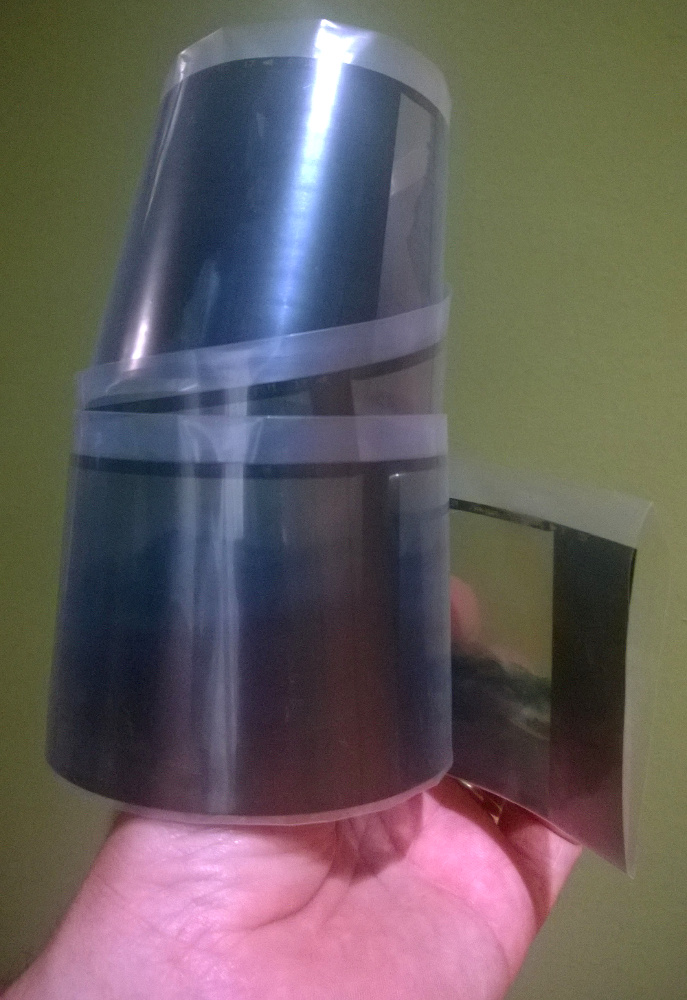 The beauty of 120mm film. These are slides. 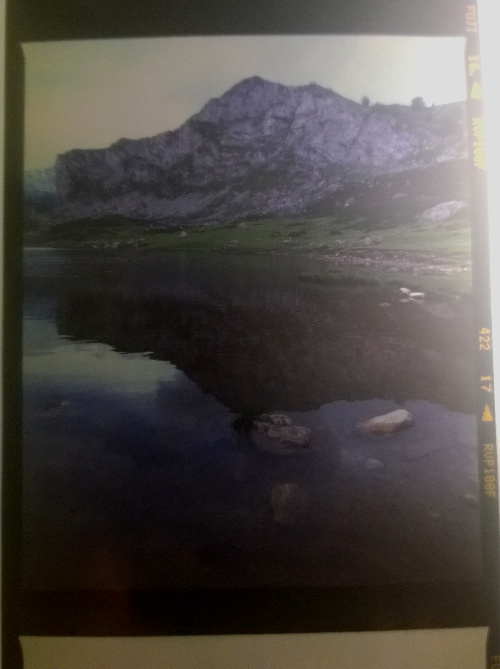 Loaded the Fuji Acros, both on the 6×7 and on the 6×4,5 backs and had time to capture 3 films, before deciding to call if for the set. During all this process, extra procedures that you take for granted when shooting digital, must be preserved. It’s analog EXIF 🙂 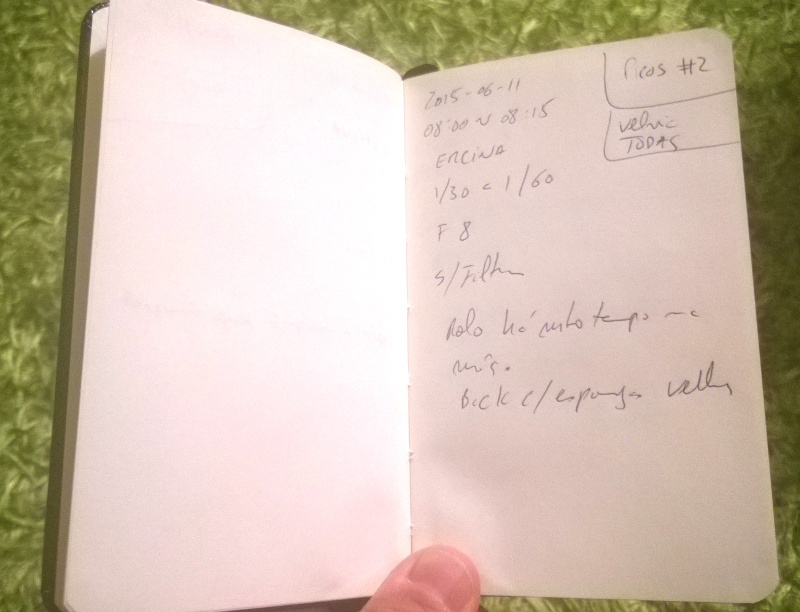 Yes, its EXIF but not for the faint of heart!

Time for going back to the lodge and have a great breakfast with a fantastic green view from the restaurant’s windows.

11:00 with a comfortable stomach from the breakfast it was now time to hunt for some sort of expresso (café sólo as in Spanish), and from there to the next destination: the Ceres river path. The road to get there is fabulous. Green everywhere; water everywhere; turns EVERYWHERE 🙂 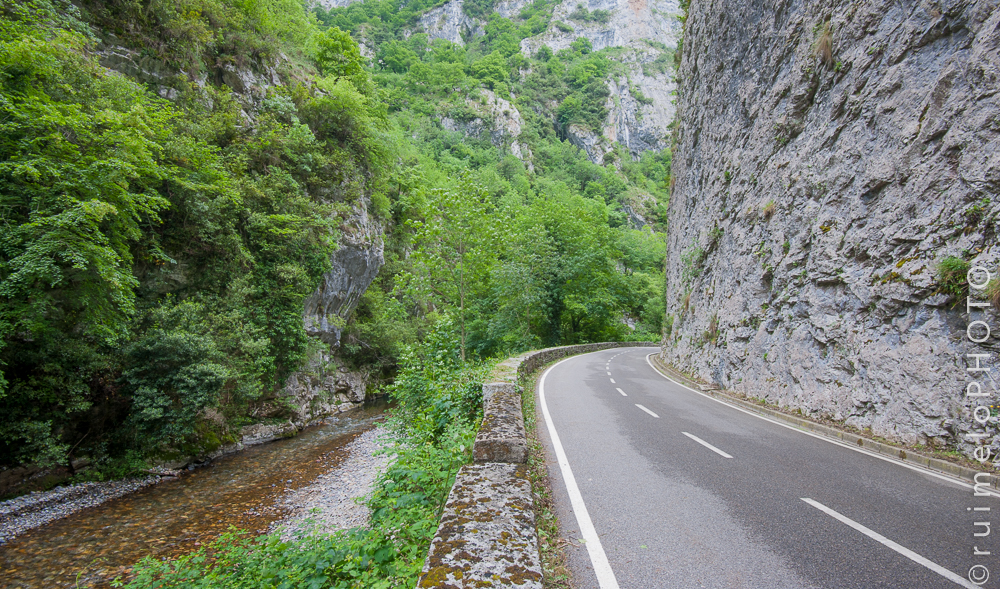 12:30 before starting the hike, we took what we expected to be a light meal: bocadillos. The reality was much more cruel, when 40 cm sandwiches started to fall on the table. Ai ai, even the meals are tough here 🙂

14:00 Cares river hiking track follows the river with the most amazing views I’ve ever witnessed: waterfalls, unbelievable rock walls, tunnels, fast waters, trees hanging from the most unexpected places and green; green everywhere I look. We hiked for about 4 or 5 km trying to capture the most out of the experience. In my case I felt I came short of capturing the true dimension of the place. 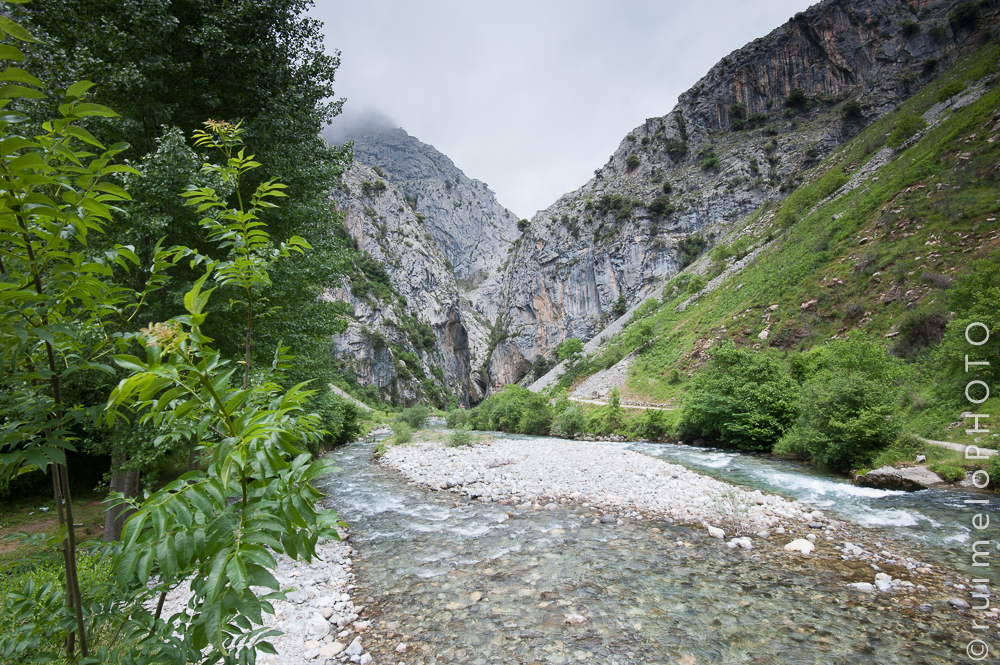 The track is steep and in some places over 100 meters from the bottom of the canyon… and no fences here. It is not dangerous if you are responsible. If you are a dare devil, I wouldn’t recommend it. Taking pictures required to stop, shoot and only then move on. Being used to shoot on the tripod, it wasn’t that much of an effort to follow this process.

We walked about 90 minutes into the canyon and then folded back to the beginning where the cars were. Once again the Mamiya stayed in the car. it was too much load to carry, so I thought. A myth about to be broken. 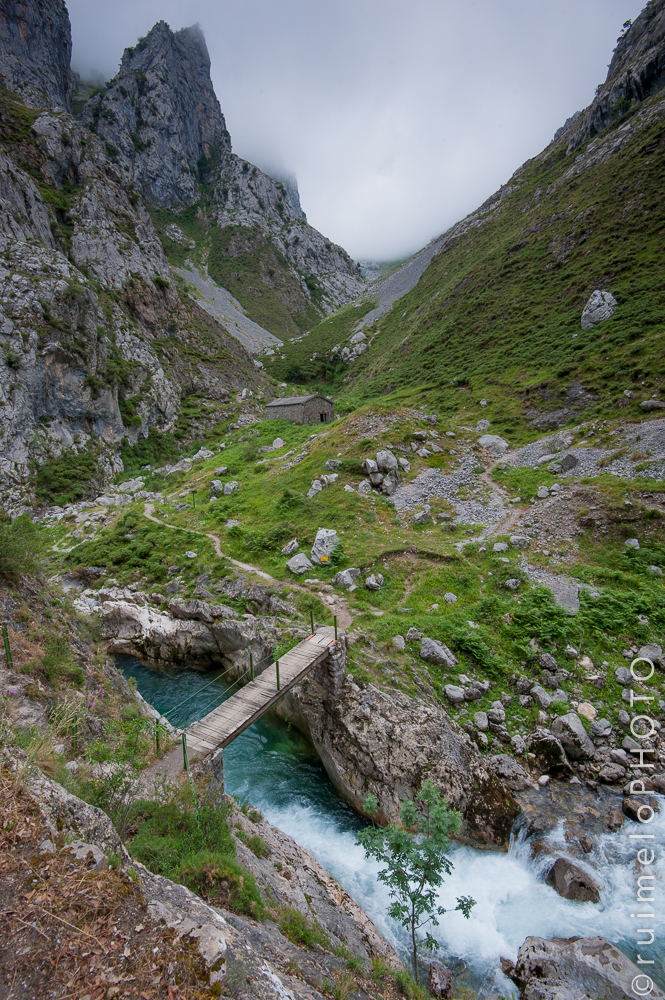 On the way back, I changed to the 70~200.  Interesting how becoming both approaches are to landscape photography. 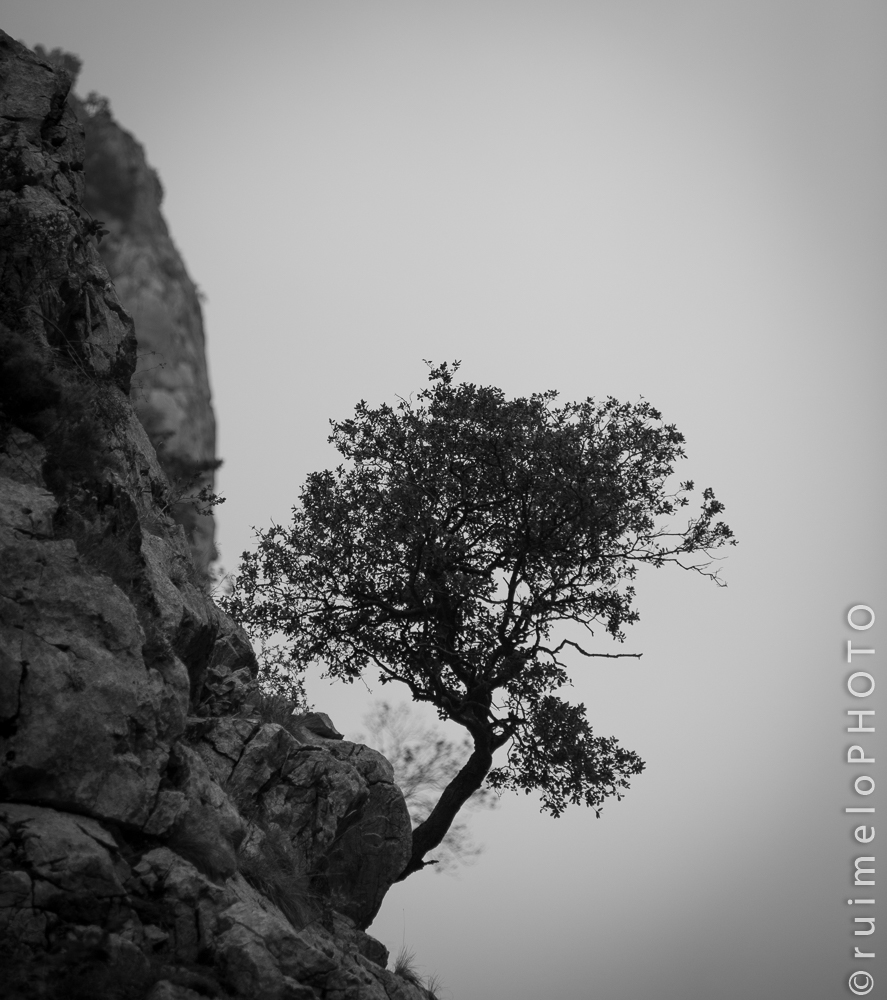 18:00 back to the cars, it was now time to drive some more to Riaño

19:00 after a couple of beers and some nice Spanish snacks, time to capture the sunset by the water. A dam surrounded by mountains offers an interesting postcard like image. Lots of relatively calm water, stroke me as an interesting scenario for some long exposures. Branches coming out of the water, fallen trees, dried roots and rocks were excellent first plane objects that the whole team explored wisely. 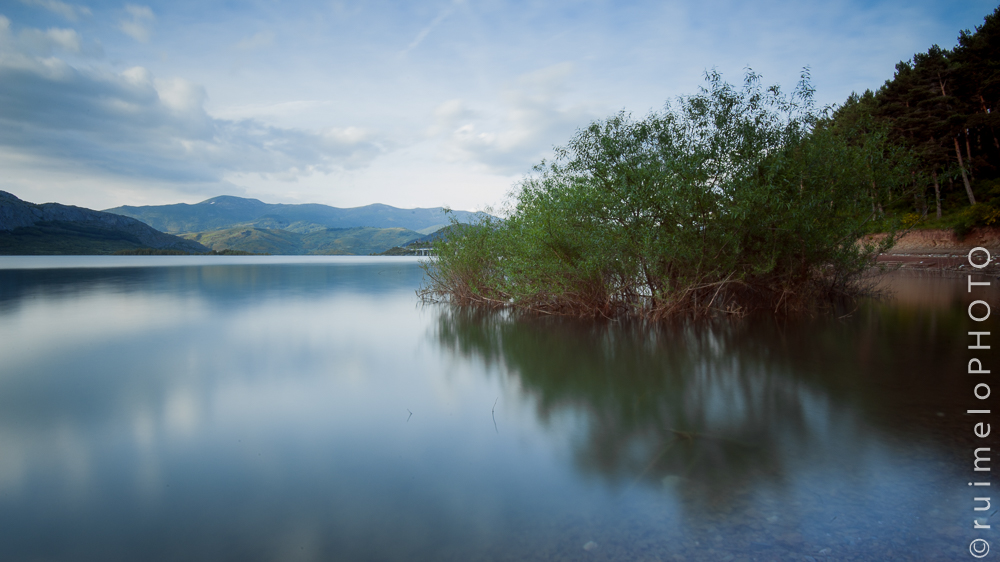 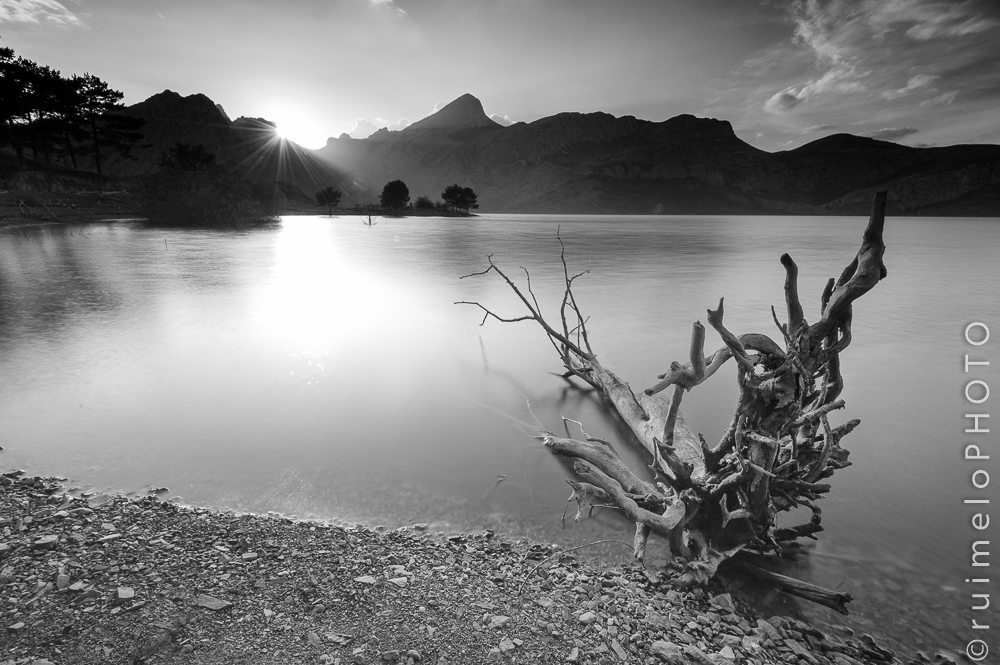 Dead trees at the Riaño dam.

22:30 time for dinner. After the daylight vanished, it was now time to grab a bite. It was late and not easy to find a place to have dinner, but we managed to find a nice cosy place and feasted

00:00 driving time. I felt really tired and yet, we had over 1 hour of mountain road before getting back to the hotel. This time with a busted light. The roads were empty and the cars were fast into the road, which helped to pump the adrenaline and keep awake but, with all those Gs on the turns, we had one of the team members car sicked. We stopped to grab some air and restore his stomach, which actually felt quite nice. We then reduced the pace and traveled less aggressively, which worked well for everyone. Unfortunately this turned the ride a bit longer and we only got back to the hotel by 02:00.

02:00 Backup cards, recharge batteries and fall in bed I think with my clothes still on.

Due to the tired team, we agreed to skip sunrise in the morning and meet for breakfast at 09:00. 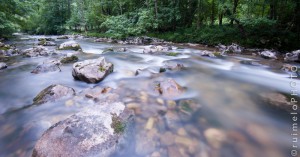 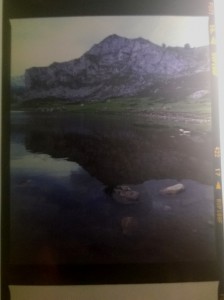 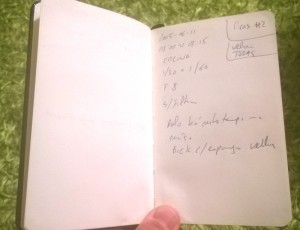 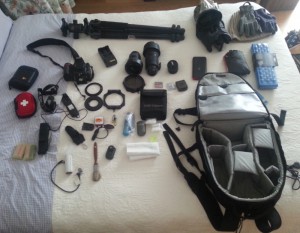 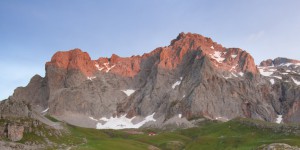 Picos da Europa expedition 2015: day 1
As I start writing this new set of posts, less than 24 hours have gone by since arriving from the 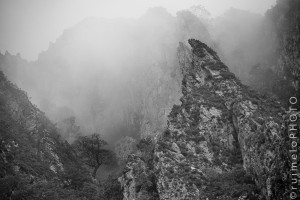 Picos da Europa expedition 2015: day 3
Day 2 was a long, exhausting day and as a group we decided to sleep a bit more this morning.
1 2 Next »